In many locations a stable power grid is taken for granted. But there are still many places around the globe where power outages can cause significant interruptions to business operations, disruptions that can have serious financial implications. In these places, reliable backup power can be extremely valuable.

One location where ATM operation is regularly interrupted is in the Philippines, a country that suffers recurrent grid instability that interrupts business continuity. The fact that some 72% of Philippine power plants have been in operation for at least 16 years or more contributes to the grid’s poor performance and inadequate power supply.  Power is unstable, causing 5 – 12 hour power outages on islands and 2-4 hour outages in cities on an almost daily basis.

A June 2019 Philippine Business World special report indicated that through May of this year, there have already been 20 yellow alerts and 9 red alerts recorded by the National Grid Corporation of the Philippines (NGCP) indicating inadequate energy reserves.  The report cites data from the Central Intelligence Agency’s World Factbook that the Philippines, with a population of ~100 million, has a lower power capacity per person than Vietnam, Malaysia and Laos.  While demand for power is constantly increasing, the supply of new power plants is slow, bureaucratic and suffers continued postponements. In these circumstances, banks require an independent solution that will eliminate their dependence on the grid.

The Problem: ATM machine operating losses in the Philippines due to insufficient backup power

One example of an application that is highly dependent on reliable power is the automatic teller machine (ATM) deployed by banks worldwide. An ATM machine allows customers to rapidly carry out simple financial transactions that do not require the intervention of bank staff. As such, an ATM can process multiple simple transactions per hour. When an ATM machine has downtime due to a power outage, the bank suffers a significant loss of revenue for each transaction that could not be processed.

According to the Bangko Sentral ng Pilipinas, as of March 2019 there were 21,682 bank-regulated ATM machines operating in the Philippines, of these 11,922 on-site at bank facilities and 9,760 off-site. Over 8,000 of these ATMs are located on remote island sites. 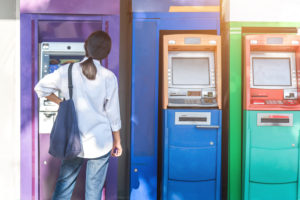 Rapid ROI through Prevention of Transactions Missed Due to Power Loss

When we take into consideration the current number of ATMs operating in the Philippines and the downtime due to power outages, using assumptions based on typical bank ATM operations, we can estimate that if the ATMs in the Philippines would have reliable backup power to operate during the hours that are currently lost to outages, the estimated additional revenues over five years in US dollars could add up to as much as $1.9 million PER ATM. This calculation is based on an average transaction cost of some $0.5 per urban ATM and $2.5 per remote ATM.

The banking system of the Philippines includes many different types of banks, from universal banks to rural banks to non-banks – financial institutions which do not have full banking licenses but offer bank-related financial services. Moody’s recognizes the banks in the Philippines for their asset performance, liquidity capacity and strength in the local economy. According to Wikipedia, there are 36 universal and commercial banks, 492 rural banks, 57 thrift banks, 40 credit unions and 6267 non-banks with semi banking functions. (Source: https://www.wallstreetmojo.com/banks-in-philippines/) ATM services are available for both international and domestic customers throughout the Philippines, with numerous facilities in urban and commercial areas and fewer yet high-in-demand machines in rural and remote island locations popular with tourists.

Both foreigners and Philippine citizens regularly employ ATMs to carry out a variety of banking services. ATMs give customers 24/7 access to their accounts to use banking functions such as cash withdrawal, bills payment, fund transfer, balance inquiry and more. Philippine banks earn sizeable fees from ATM transactions, both from domestic users and especially via dynamic currency conversion for foreign bank customers. Banks collect additional fees when their ATMs process transactions for customers of other banks; it is customary for ATMs to charge an additional fee beyond the fees charged by the cardholder’s own bank. As such the ATMs serving tourists in remote island locations are a profitable source of revenue for Philippine banks and ATM providers. To this end, banks endeavor to ensure continuous power to keep ATMs operational at all times.  Power outages not only cause lost revenue due to missed transactions, but banks draw fines and penalties for non-compliance with banking regulations for mandatory uptime and service; indeed extensive outages may even cause derating for non-compliance.

The existing backup power solutions available to banks in the Philippines today do not fully meet the banks’ needs. The standard battery or UPS power backup often ceases to operate before grid power returns; expanding these solutions is generally not possible due to space constraints. Diesel generators offer longer duration backup, but along with noise, pollution and vibrations that cause offense to customers, especially in urban locations. Moreover, substantial resources must be invested to maintain the generators to operate reliably and to secure the generators and their fuel against vandalism and theft.

In contrast, fuel cell backup power offers a rugged, silent, clean, hassle-free and ultra-reliable source of backup power that extends for as long as hydrogen fuel can be made available and suits both indoor and outdoor sites, able to withstand even the most severe weather conditions. As issues of sustainability, decarbonization and climate change become increasingly high priority for public and private institutions everywhere, zero-emission fuel cell energy sources qualify for government renewable energy incentives and contribute to higher satisfaction and reduced customer churn. To explore how the GenCell G5 solution can meet your bank’s specific requirements to backup ATM operations and prevent ATM downtime, and to calculate the TCO for backing up your ATM fleet, click here.