Fuel cells are increasingly seen as a reliable green energy alternative to polluting processes based on combustion or incineration, from diesel and gasoline engines to coal-burning power plants. Rather than burning a fuel to create electricity, fuel cells rely on an electrochemical reaction—which does not produce greenhouse gases.

With so many disparate uses, it’s not particularly surprising that not all fuel cells are truly alike.

While each fuel cell has two electrodes, an anode and cathode, and an electrolyte between them—fuel cells have different types of electrolytes and electrodes—and their electrochemical processes occur at various temperature levels.  As such each type of fuel cell (or fuel cell technology) has its own inherent strengths and weaknesses that can make them more suitable for specific markets and applications. 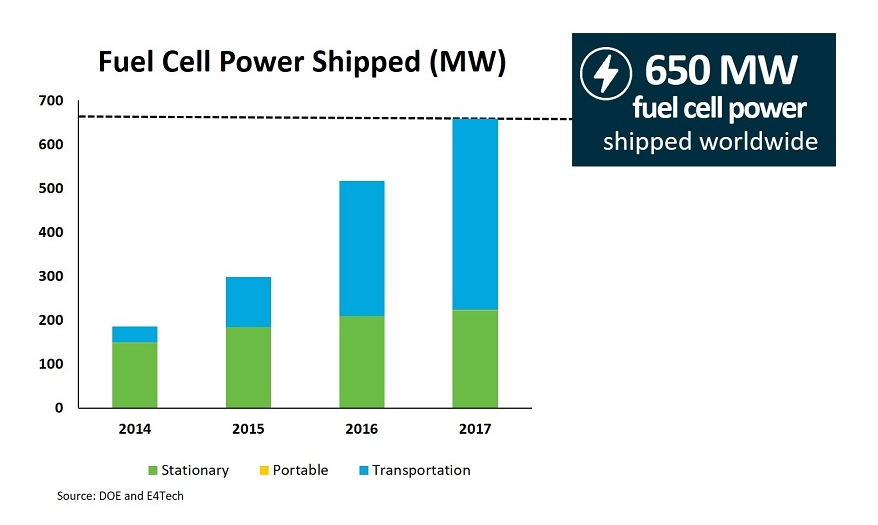 Schematic diagram of an alkaline fuel cell. For more information see the video How a Hydrogen Fuel Cell Works.

Alkaline fuel cells (AFCs) were developed in 1959 by Francis Thomas Bacon. They use a liquid alkaline electrolyte such as potassium hydroxide (KOH) in water and cathodes that are usually made with platinum—although GenCell’s platinum-free cathodes are a notable exception. Operating at 60-70ºC (140-158ºF), AFCs are among the most efficient type of fuel cells, reaching up to 60% efficiency and up to 87% combined heat and power. Both the US and Russian/Soviet spaceships used alkaline fuel cells to produce electricity and drinking water for astronauts. Some other advantages of AFCs include their virtually instant operation without pre-heating, even at sub-zero temperatures, and their resistance to humidity and salt air. AFCs are used as backup generators or long-duration UPSs, for powering telecom towers and urban buses.

Proton exchange membrane fuel cells (PEMFC or PEM fuel cells) use a water-based or mineral-acid based polymer membrane as an electrolyte and platinum group-based electrodes. The water-based PEM fuel cells operate at 80-100ºC (176-212ºF) while the mineral-acid based PEMs, known as high-temperature PEMs (or HTPEMs) operate at up to 200ºC (224ºF). They require precise humidity conditions to operate and their acidic nature requires the use of a platinum catalyst. PEM fuel cells are relatively small and light-weight and are therefore the leading fuel cell technology used in material handling applications such as forklifts and for transportation applications, including cars, buses and trucks. As such, PEMFCs are the fastest-growing type of fuel cells.

Developed in the mid-1960s and field-tested since the 1970s, the PAFCs are one of the most mature types of fuel cells and the first type to be commercially used. Phosphoric acid fuel cells (PAFCs) use phosphoric acid as an electrolyte and an anode and cathode made of a finely dispersed platinum catalyst on a carbon and silicon carbide structure. They have been typically used for stationary power generation in buildings, hotels, hospitals, and utilities in USA, Europe and Asia. The units have been technically successful and very reliable, with 40% plus efficiency levels and tens of thousands of operating hours. Water management in these fuel cells is easier than in PEMs, and they are more tolerant of impurities in hydrogen. However, the emission of phosphoric acid vapor is problematic and good ventilation is mandatory. PAFCs are less powerful than other fuel cells for the same weight and volume and require much more platinum than other fuel cells, which raises their cost.

Molten Carbonate Fuel Cells (MCFCs) use a molten carbonate electrolyte and operate at 650 ºC, which allows them to operate on unreformed fuels such as natural gas, methanol, ethanol, biogas, and coal. In addition, the absence of a catalyst made from noble metal such as gold, silver, or platinum allows MCFCs to be more cost competitive with more traditional sources of power. MCFCs also offer efficiency levels of close to 50%, which can be increased up to 80% when high-quality waste heat is reused.  MCFCs require a large number of stainless steel and nickel parts that increase the materials cost and that may require specialized manufacturing techniques. Molten carbonate is also inherently corrosive in nature. Since the operating temperature is so high, MCFCs require significant time to reach operating temperature and are slow to respond to sudden changes in electricity demand. As such, they are best suited for the provision of constant power in large utility applications.

Solid oxide fuel cells are made up of very thin layer of ceramics. The ceramics used in SOFCs do not become electrically and ionically active until they reach 500-1000 ºC (1060-2120 ºF) and the high temperature enables them to oxidize nearly any fuel, including gasoline, diesel, natural gas, biofuels, hydrogen and even coal gas. The ceramic construction needed to provide stability and reliability makes SOFCs more expensive than other fuel cells. The solid electrolyte is made from a ceramic material called Yttria-Stabilized Zirconia (YSZ). Since the operating temperature is so high, SOFCs require significant time to reach operating temperature and are slow to respond to changes in electricity demand. As such, they are best suited for large applications although research continues to develop lower temperature SOFCs for use in vehicles.

Are Microgrids The Future for Utilities? Will Polluting Diesel Generators Restrict Their Adoption?