GenCell Energy is proud to join Space enthusiasts around the world in commemorating the 50th anniversary of the landmark Apollo 11 Mission that landed man on the moon. We feel a special connection to the Apollo Space program. Not only is this because of our personnel who were involved in the Space industry during their careers, but because GenCell’s fuel cell technologies are based on those developed for the Apollo mission. According to the NASA archives, on the Apollo 11 command service module, fuel cells combined liquid oxygen and hydrogen stored at extremely cold temperatures to generate electric power and water for drinking as a byproduct. 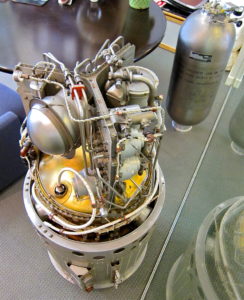 GenCell has continued to advance and refine these technologies and has invested significant resources to adapt them for mainstream adoption on Earth. During this process, GenCell has developed patented technologies that have enabled us to reduce the capital and operational expenditures required to operate the fuel cells. One important improvement was the invention of a mechanism that applies ambient air as an oxidizer, eliminating the need to use costly pure oxygen. Then we achieved another major breakthrough by discovering how to use a non-platinum catalyst. These and other developments have significantly reduced the capital costs of the fuel cell.

To reduce the operating costs, we have designed and engineered fuel cells that can run on lower-cost fuels such as industrial-grade hydrogen gas and anhydrous liquid ammonia.  Our team of dedicated scientists continues its efforts to both improve fuel cell performance and reduce production and operational costs, so as to make fuel cells even more accessible and applicable for different commercial and industrial needs. With global investments in the hydrogen economy making hydrogen more readily available, while objections against the use of fossil fuels are on the rise, the popularity of fuel cells is today growing faster than ever.

Looking back over these 50 years of incredible achievements, we salute the NASA scientists for their enormous contributions to scientific knowledge. Space exploration has expanded our world’s horizons, enabling us to better understand our physical Universe and having implications on virtually every discipline, from agriculture to medicine to energy and more.  In fact, we look to today’s NASA scientists with expanded hopes that the continued advancement of Space exploration will shed light upon and assist in finding newer and better solutions to the many challenges facing our world, especially those that changing weather and climate pose for our environment.