It goes without saying that loss of human life is the most devasting consequence of Hurricanes and natural disasters.  This is followed by the hardship and suffering caused by destruction of personal property, fear for public health and safety and the long, hard work of cleaning-up and rebuilding homes and communities. As of October 2, 51 people had died from Hurricane Florence and 1 million people had been forced to evacuate their homes.

In this blog however, we seek to explore another impact of Hurricanes and natural disasters – the economic costs – and how utilities have the power to mitigate some of the damages.

The numbers stack up

While damaging the economy and causing economic hardship, the long-term economic impacts  of hurricanes and natural disasters are viewed differently depending on the eyes of the beholder. In 2017, Hurricane Harvey destroyed $125 billion worth of property in Houston and Moody’s Analytics concluded that lost economic output was just $8.5 billion or 0.04% of the US economy’s $19 trillion of economic output. 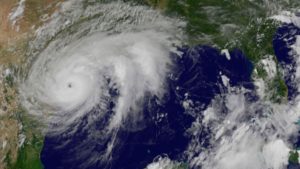 Analyzing economic data from hurricanes over the last two decades, Moody’s found that this was not an isolated incident and concluded that hurricanes don’t have a long-lasting impact on the larger economy. This can be seen in the graph below that breaks down the costs of storms into the property damage (dark blue) as well as the lost output/economic output (light blue): 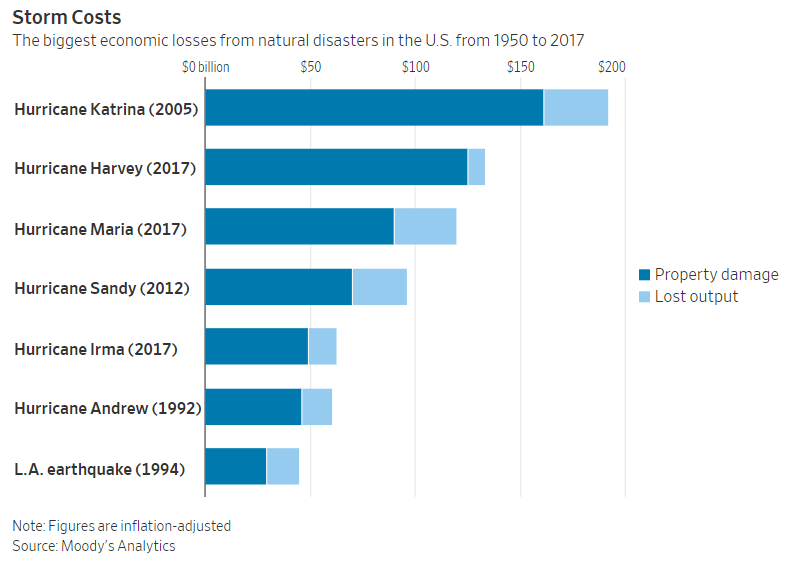 Moody’s findings concur with the 2018 Texas State Comptroller report that found that the effect of Hurricane Harvey on the Texas state economy was much less than expected.

The report demonstrates that while direct damages such as the destruction of public buildings, private property, vehicles and infrastructure represent the most obvious and visible effects of the hurricane, they are “sunk” costs whose economic activity has already taken place. Economic output is actually affected by indirect damages that interrupt business activity—such as electrical outages, damage to factories, the inability of employees to reach work, inoperative ATM machines and more.

The Texas Comptroller’s report concluded that the rebuilding and repair after Hurricane Harvey spurred economic growth as more than $31 billion dollars poured into the state economy from US Federal agencies, private insurance companies and non-profits, giving the economy a jump start until it could recover.

With record rainfalls, including 33.89 inches in Swansboro, North Carolina, and a storm surge expected to reach up to 11 feet, Hurricane Florence forced 1 million people to evacuate their homes. Money spent on hotels or sleepless nights in school gymnasiums is only compounded by the fear of the destruction to personal property and the long, hard work of clean-up.

Moreover, the suffering caused by natural disasters can often be compounded by environmental disasters. The heavy rains of Florence have swamped coal ash dumps of coal-burning utilities and breached earthen dams that store hog and animal refuse, threatening water supplies and public safety.

Efficient hurricane relief work by local and state governments can play a critical role in mitigating public hardship. Unfortunately poor governance and mismanagement can also intensify suffering as witnessed in Puerto Rico after Hurricane Maria in 2017.

Technology upgrade programs by utilities can play a critical role in mitigating the suffering caused by blackouts. During Hurricane Harvey, 350,000 people lost electricity, but earlier upgrades to transmission lines and grid systems ensured that damages to power-generating systems were not extensive. In addition, the Houston-based utility, Entergy, deployed mobile electric substations to temporarily replace substations submerged by flood waters.

During grid power failures, fuel cells, such as the GenCell G5rx utility backup solution, can supplement the 6-8 hours of electricity provided by batteries to critical systems like autoreclosers. Using hydrogen-based fuel cell power, the GenCell solution provides power until the grid recovers—even if it takes days or weeks. The solution has already been rolled out to California utility SDG&E.

SDG&E also took a novel approach with a microgrid solution for Borrego Springs, a small desert town that suffers from flash floods. Rather than deploying a parallel transmission line, they created a microgrid using generators, batteries and rooftop solar PVs at one-fourth the CAPEX.

Another technique is to preposition equipment or prepare a large restoration workforce with volunteers or workers from other utilities. In 2017 after Hurricane Irma, Florida Power & Light (FPL) had a force of 24,000 personnel, including 13,000 supplemental workers from contractors and other utilities from across the North America as part of a volunteer mutual assistance program.

Investing nearly $3 billion in infrastructure also helped FPL build a stronger, smarter and more storm-resilient energy grid that allowed them to restore power much faster. Improvements to their grid included:

With all of its preparation, Florida Power & Light expected to restore power to 4.4 million customers within two weeks of Hurricane Irma's landfall. By September 26, 16 days after the storm made landfall in Florida, 99.74 p% of FPL customers had power.

As of September 19, Duke Energy had reportedly restored power to 1.6 million customers of the 1.7 million customers who experienced an outage during the storm, with the remaining majority expected to be restored by September 26. This was no doubt supported by their largest resource mobilization ever in preparation for Hurricane Florence; with more than 20,000 people in place to restore power.

Moody’s estimates that the property loss and direct damages from Hurricane Florence will total $17-22 billion, making it one of the top 10 costliest natural disasters in US history. This cost could climb higher as many rivers have yet to crest and may yet cause additional flooding.

Like Hurricane Katrina and Hurricane Harvey, the indirect damage and net economic impact of Hurricane Florence is expected to be considerably smaller than the property loss, “only” $1-2 billion, and is expected to reduce the US GDP by only 0.2%.

While utilities cannot prevent hurricanes and other natural disasters, FP&L, SDG&E and Entergy have all demonstrated that utilities have the power to mitigate suffering by continuously upgrading their infrastructure, planning for natural disasters, and by pooling resources with other utilities. Hopefully similar success stories will continue to come to light following Hurricane Florence and more recently, Hurricane Michael.